The Smile Makers, Angie and Cupcake Book 1
by Angela Bain

Excerpt from book, published with permission 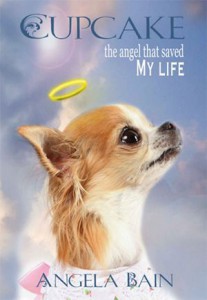 When going through the storms in life, knowing your purpose can keep you upright and moving in the right direction. This is the story of Angela Bain and the storms that rocked her world until she found Cupcake. Now, Angela volunteers her time to help bring cheer to those in the midst of life’s storms with Cupcake, a 2.2 pound, teacup, longhair Chihuahua.

Some people have said that Cupcake cannot be a service dog because she is too small. In 2013 she was listed in the Guinness World Book of Records as the smallest service dog. Cupcake has been trained to help recognize the sudden onset of chronic pain in Angela and bring her medicine, her phone and any other needed items.

Angela discovered that Cupcake had a way of lifting the spirits of anyone she met. Knowing how a small ray of hope can mean so much in a dark hour, Angela found purpose again as she dedicated her life to traveling to local care facilities to cheer up the patients and bring out their smiles. They also participate in fundraiser for cancer research, helping the homeless, and rescuing abused animals.

Registered as a service dog by Service Dogs of America, Cupcake received her training at Four Paws Playground in Bloomsbury, NJ. She is intuitive and trained to specifically help Angela Bain with a disease known as RSD, aka Reflex Sympathetic Dystrophy. This is a chronic pain condition. Cupcake is trained to notice the physical nature of RSD and act to bring Angela her medicine, her phone and other things to her. Cupcake sooths and calms Angela’s mental and emotional state as well.

Cupcake has also been trained as a therapy dog and is registered with Therapy Dogs International. Angie will visit and lend Cupcake out for Pet Therapy to nursing homes, schools for handicapped children and seniors in live-in centers. Cupcake often brings emotional relief to those who suffer from depression or who are a bit distraught from life’s occurrences. This littlest angel is truly remarkable and should be commended for her aid to others.

Purchase the book by clicking here.